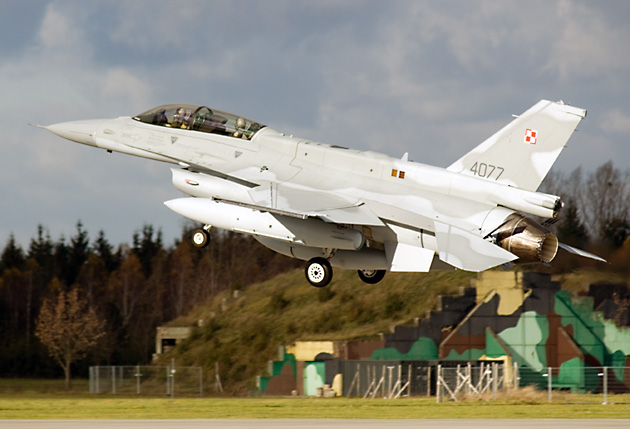 During a ceremony at Poznan's Krzesiny air-base on 9 November 2006, the first four Polish Airforce F-16 Fighting Falcons were handed over. In Polish service the Fighting Falcon received the name "Jastrzab" which translates as "Hawk". A total of 48 F-16C/D Block 52s were ordered at a total cost of US$ 3.5 billion. Delivery is scheduled to be com-pleted in 2008.

The 3rd tactical air squadron is based at Poznan-Krzesiny and the first Polish unit to receive the F-16 Jastrzab. For the past two years 3.elt has operated the TS-11 and before that the MiG-21bis/UM Fishbed.

The 6th tactical air squadron will move to Krzesiny in early 2007 and will be second to convert to the F-16. During 2006 the squadron ceased flying the Su-22M4/UM3K Fitter aircraft from Powidz airbase in the heart of Poland.

Third unit to receive the F-16 will be the 10th tactical air squadron at Lask. It too has flown the TS-11 Iskra after retirement of its MiG-21MF/UM Fishbeds during the year 2004. The unit will remain at Lask.

On the 4th of November two Polish F-16s left Texas for Poland but they had to divert to an airbase in Maine with some problems. On the 6th they took off again and were joined over the Atlantic Ocean by another pair of Polish F-16s. Unfortunately two diverted into Keflavik, Iceland with problems while the other pair flew on to Spangdahlem, Germany. On the 8th the pair of F-16Cs left Keflavik and landed at Krzesiny around 15.30 after a refueling stop at Leuchars in Scotland. The following day the F-16C and F-16D flew from Spangdahlem to Krzesiny.

A ceremony, including a groundparade was held once the F-16s had landed. The ceremony was attended by the Polish President, the Minister of Defense, the Polish Airforce CO and the US ambassador to Poland, to name but a few. In my opinion it was a great day for Poland!